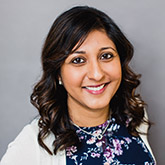 Chavi Khanna Koneru (she, her) is co-founder and Executive Director of North Carolina Asian Americans in Action. Koneru moved to North Carolina in 1989 and has spent the majority of her life living in the state, including attending college and law school locally at the University of North Carolina. This has allowed her to gain a deep, personal understanding of what it means to be Asian American in the South. Additionally, her legal background in voting rights law has given her the opportunity to interpret and enforce laws impacting the Asian American community, including during her time in the Voting Section at the U.S. Department of Justice, where she focused on language access for Asian American voters.