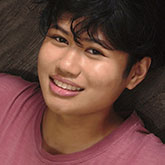 MK (they, she) is a Raleigh local who attended UNC-Greensboro as a nursing major and Lloyd International Honors College student. While at UNCG, they served on the school’s Filipino American Student Association executive board where they engaged students and Triad residents alike in Filipino and Filipino American culture and history. Through college youth engagement as well as serving as a panelist and facilitating discussions regarding BIPOC and AAPI communities, MK became inspired to work with Asian American youth back in Raleigh in hopes of sparking the want to self-advocate for their communities. You can catch MK playing music, watching movies and shows, practicing Korean with friends, or adding ideas to their fun creative writing memo.