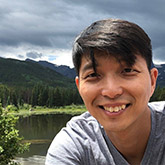 Ricky (he, him) is co-founder and Program Director at NCAAT in Action. Ricky grew up in Greensboro, North Carolina, and studied journalism and mass communication at UNC-Chapel Hill, concentrating in visual communication and design. He began his career in DC at National Geographic and at the Smithsonian Asian Pacific American Center, where he became more involved with Asian American grassroots organizers. Ricky returned to North Carolina in 2010 in hopes of bringing that AAPI experience to his home state and worked at NC Policy Watch, a project of the North Carolina Justice Center, before joining NCAAT fulltime. In his free time, he snuggles with his puppy Charlie.